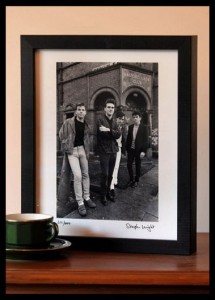 I was lucky to be working in Manchester with my first Nikon in hand and start my career photographing live musicians. As time went on these included many  well known names – Madonna , New Order, Prince, Miles Davis, Nina Simone, James Brown and many more!

These have been widely published in magazines and books and these images have become a small part of the visual history of modern music.

Print sales of the Smiths and others – click here

From £60 – VARIOUS SIZES AND PRICES – Photographs are shipped worldwide!

If you wish to use any of the photographs please contact [email protected] to arrange fees.

Print, web and film or video uses all incur fees.

THE SMITHS at the Salford Lads Club

Apparently it’s the most famous photo of The Smiths and that makes me smile.It’s the band not the photo that’s classic! Tho’ I love it that people enjoy it years later and that I caught them at their magnificent peak.

To me I count myself so very lucky, as a huge fan to have got the opportunity to see and shoot The Smiths live and then to get to meet them and shoot the Salford Lads image. The first live show I shot was in 1984 at the Free Trade Hall – I was so skint I could only afford one reel of film and had to walk a long way home. From this show I caught the shot of dead flowers hanging from his jeans, but my favourite now is of Morrissey waving flowers above his head, shot from the side of the stage. More live shows followed and then Rough Trade asked me to shoot a session …

‘That’ photo was shot on a cold, dark, winter day in Salford, yet somehow it has a darkness that sets the right mood. I and friend George Pace went to shoot the session mid December with a pocketful of film and a bit of taxi fare.  It seems so casual and un-posed and in a way that’s just how it came together.

These days its been accepted as part of the collections of the National Portrait Gallery, the Manchester Art Gallery and the Salford Art Gallery. All rather funny when the original film was processed in a darkroom in my bedroom -with the chemicals kept in old drinks bottles!

“Stephen Wright’s original photograph, used for the inside gatefold of The Queen is Dead, clinches the prize for the most famous image of the Smiths”  Will Woodward – The Guardian

Bit by bit I am adding other artists to the Print sales collection – so far U2 , Miles Davis,Prince , Madonna, John Lydon , Nina Simone , Gregory Isaacs , New Order…but more will follow…

Sales of Photographs of the Smiths and other artists – click here

These days these images continue to crop up in magazines and books and remind me fondly of my time in Manchester. Many are available as Limited edition prints which I sign and edition and have been sent all over the world. I love the idea of my photos of my favourite band being framed and cherished. Prices start at £65 and each is produced on real silver halide photographic paper and printed with a white border.

I’m pleased that people enjoy them years later and also  they have raised money for a variety of charities including obviously the Salford Lads Cub – of which I am an Honorary Member.

A selection of my antique SMITHS photographs will be

Star and Garter Manchester http://www.starandgarter.co.uk for the BEST Smiths/Morrissey disco!

I hope you enjoy them

True To You Magazine